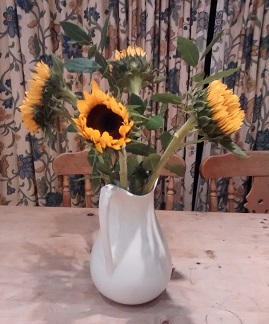 This summer, we decided to start an experiment to grow sunflowers from seeds – just like our character, Smudge the Spaniel does in our activity Seeds to Plants.

Seeds to Plants is a popular science activity for children aged 4 to 8 years old. It is currently an app for iPads, a free app, and it also runs online (fre with ads). It is designed to help children learn that in order for plants to grow, they need a source of warmth, water, and to be kept away from the cold. In Seeds to Plants, this is done by children choosing the weather on each day, and a mix of rain and sunshine works best, and avoiding choosing snow for two days running!

In our case, we started with an old packet of seeds, some plastic cups, and some soil from the garden.

The first amazing thing that happend was when, on day 2 or 3, we saw shoots appearing above the soil. What was most amazing, was that the seeds still worked, despite having been in a packet for at least ten years!

After a few days, the first leaf appeared, and the plant started to grow! In the software activity, this is also one of the first noticeable thinsg to happen

Through June, the plants continued to grow. One plant is shorter than all the others, but it does continue to grow – in the software activity, all the plants are the same height, although the details about them are slightly different.

After six weeks, no heads had started to appear, but the plants were just about ready to be moved from their plastic cups into a larger plot: in the software activity, Smudge had anticipated this, and planted them into a patch of garden!

It has been a remarkable summer – and not just for England’s performance in the soccor World Cup – but we’ve had a heatwave that has lasted, really from late April, with hardly any rain. This has meant that we have needed to keep the plants watered – in the software activity, children do have the option of using a watering can. If children don’t water, then the plants will start to wilt, but by choosing rain, or watering them, the plants will recover

And that is just what happened to our plants – they would wilt, when we forgot to water, and then recover. I do remember not being able to watch the penalty shoot out against Colombia, going out and watering the garden, with success – the plants recovered, and England got through to play Sweden!